These volunteers assisted with multiple programs within Extension, such as 4-H Youth Development, the Extension Master Gardener Volunteers (EMGV), Forsyth Community Gardening (FCG) Mentors, the Extension and Community Association (ECA), and the Expanded Food and Nutrition Education Program (EFNEP), to name a few.

In honor of their hard work, Forsyth County Cooperative Extension hosted an appreciation luncheon on April 7, 2017 to thank these volunteers for their selfless contributions of time, energy, and expertise to Forsyth County.

Edgar Miller, Chair of the Forsyth County Cooperative Extension Advisory Council, began the recognition ceremony and acted as the emcee throughout the event. NC State Extension District Director Jim Cowden contributed to the opening remarks, sharing the importance of volunteers to the work of Extension. Shandi McDaniel, a 12-year-old member of Forsyth County’s 4-H program, treated attendees to a moving rendition of Whitney Houston’s “I Have Nothing.” County Commissioners Gloria Whisenhunt and Fleming El-Amin then presented awards to several outstanding volunteers recognized by Extension.

Rita and Bill Deck received the EMGV award for their many contributions to the program, including the creation of of the “Little Library” at the Arboretum at Tanglewood Park.

The Family and Consumer Science award went to El Buen Pastor Latino Community Services, along with the Director Erika Stewart and the Parenting Coach and After School Program Coordinator Sandy Castro, for their partnership with Cooperative Extension’s Expanded Foods and Nutrition Education Program.

Lea Nading and Ann Williams both earned Friends of Extension Awards for their hard work across multiple program areas. Nading, a registered Horticultural Therapist, has helped create accessible gardens in senior centers, supported several community gardens for residents of public housing, and partnered with Extension to conduct diversity training for volunteers. Williams, an active EMGV since 2008, acts as Treasurer for the EMGV Association, is a Community Gardening Mentor, plans and delivers presentations for the EMGV’s Speakers Bureau, and helps maintain the native plant gardens at the Arboretum at Tanglewood Park and Emily Allen Wildflower Preserve.

And last but not least, the Ministers’ Conference of Winston-Salem and Vicinity earned the Friend of Extension for a Partner Organization Award for their work with both the Community Gardening and Urban Agriculture Programs at Extension. Their support has been extremely important to the success of the 2016 and 2017 Urban Farm School, as well as the Winston Lake YMCA Community Garden.

The entire Extension staff and Cooperative Extension Advisory Council would like to thank our dedicated volunteers for all their hard work. Your accomplishments are truly astounding, and we are fortunate to work with such involved, caring citizens to better our community. 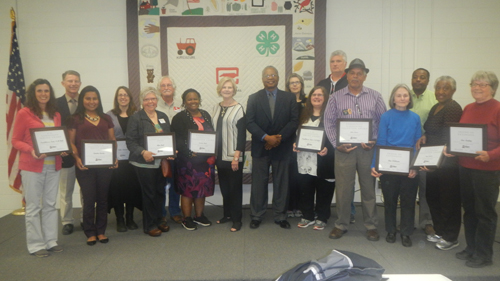 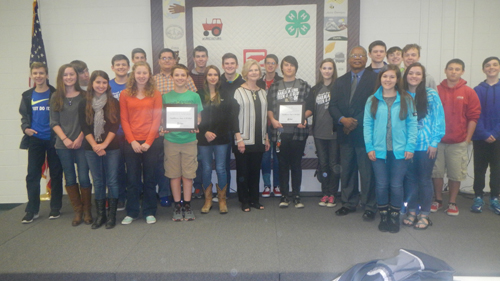