Dr. Ferguson will give an illustrated presentation of archaeological investigations in and around St. Philips Moravian Church in Old Salem. Excavations revealed the hidden gravestones and obliterated graves of Salem’s original Strangers’ Graveyard and the graveyard used for enslaved African-Americans after Wachovia’s white Moravians embraced racial segregation. The position and plan of this graveyard was determined by a combination of evolving racist attitudes and compromised protestant piety. Preservation work at old St. Philips played a role in encouraging racial reconciliation between the present-day St. Philips Congregation and Salem Congregation as well as the apology for slavery by the Southern Province of the Moravian Church.

Leland Ferguson is Distinguished Professor Emeritus of Anthropology at the University of South Carolina, and has been a practicing archaeologist for more than forty-five years. He is the author of Uncommon Ground: The Archaeology of African America, 1650-1800 and God’s Fields: Landscape, Religion and Race in Moravian Wachovia which recently received the 2014 James Deetz Book Award from the Society for Historical Archaeology. Dr. Ferguson holds degrees from North Carolina State University and the University of North Carolina at Chapel Hill. He is a 1960 graduate of Walkertown High School. 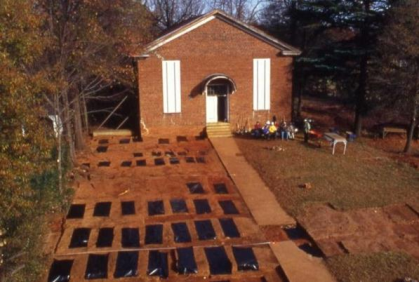