On July 30, 2012, a group of dedicated film lovers gathered at Teen Central at the Central Library. Together, in a week’s time, they were committed to producing short film documentaries. Mentors and students got immediately to work, and their accomplishments were viewed in the auditorium on Monday, August 6.

“We’ve had a summer full of teen programming, but this is really special,” said Teen Coordinator Janis Fox. “All of these students have put their hearts into their projects.”

A partnership between the Library and the Wake Forest University Documentary Film Program made a week of skill-building camp possible for eight local teens. In its second year, WFU graduate students shared their know-how, technology, and time. Sam Smartt, MFA candidate beginning his third year, said, “It’s great to learn from a mentor, not necessarily in a classroom situation. It’s a practical way to learn, and I also want to teach.” He’s paying forward, just as his professor helped him on a project over the summer.

On the receiving end, Ruth Sacharzewski, heading into the 11th grade, reported that she “loves filmmaking!” She wants to go into this as a career, and she was here because she wants to learn more. Did she? “Yes!”

Ruth teamed with Ashlynne Kirkpatrick on their project. They are both from nearby Davie County and participate in a young filmmakers club. Ashlynne liked getting experience and practice, saying, “We could make errors and get help right away. I’m kind of shy and it was very helpful to learn how to interview.” They produced a profile of Ashlynne's fencing coach.

Students were allowed to ask anything, and their WFU counterparts shared their passion for documentaries and, by all accounts, were fun to listen to, even with constructive criticism. The focus was on learning and how to get better.

Jake Carah from WFU said the teens were “very cooperative and interested. They like being here at the Library, and so do we. It’s great that the Library does this, meeting teens where they are.”

So, what can future filmmakers do in a week’s time? They learned the art of visual storytelling, teaming up to:

The tools they used to produce their films crossed the digital divide, filming on Flip cameras (thanks to WFU) and composing entirely on computers using Windows Movie Maker. To get the format right, the footage had to be imported through an mpg stream clip application. Technology had improved over last year’s camp.

Chandler Pettigrew, starting high school in a couple of weeks, and Brittney Garrett, an eighth-grader visiting from Alabama, teamed up to tell the story of the re•tale store on Burke Street, conducting interviews and learning how to place voice-over narrative over video of the store. Chandler, a regular at the Reynolda Manor Branch Library, saw the film camp on the Library’s website and signed up. “It’s a lot of fun, and I’ve gained lots of skills,” she said. “We had to use our imagination. We had to change locations and apply what we learned.” Chandler is working toward a career on television.

Brittney heard about the camp through her aunt, saying, “I learned lots of what I didn’t know before. I have a digital camera and can apply what I’ve learned right away.” She'll be filming in Alabama with what she's learned.

Kaylee Roope of Lewisville is headed to the seventh grade and said her favorite part was “going out and filming, having fun with the Wake Forest students. The only setback is waiting on the software to import the footage, so we worked on our storyboard.”

Ariana Leon-Hicks, tenth-grader from Clemmons, was Kaylee’s partner, and she enjoyed shooting video at Chelsee’s Coffee Shop in downtown Winston-Salem. Ariana is not new to programs at Teen Central, serving on the Teen Advisory Board for the Library. She was all smiles while her video clips imported to the computer, planning her story. “You’ve got to spend time organizing, for sure,” she said.

Anthony Joyce heads into the eighth grade in Winston-Salem with new documentary-making skills. “I always have wanted to go to Wake Forest, like these guys.” When asked if he wants to make a career out of filmmaking, he said, “I’m thinking about being a nanoscientist or a paleontologist.” For this past week, Anthony told a field-level visual story about Winston-Salem Dash baseball.

“The profession can be unstructured, going project-to-project. They are getting a hands-on approach,” said Smartt. The week consisted of “less lecture, more practice, and learning concepts,” he said. Several WFU students in the Documentary Film Program made appearances during the week, including Brenton Richardson.

This teen library program was provided free of charge, with the equipment furnished by WFU through an earlier grant. Without digital technology, a camp like this would not have been possible. The generations that processed film have passed, and as Sam said with a smile, “I’ve never even used analog film.”

Filmmakers and film appreciators gathered in the Central Library auditorium on the following Monday for a showing of the products of their efforts. Mentors, teens, families, and friends were all beaming at what the projector displayed on the big screen.

Janis observed some intense expressions on faces this week as they accomplished their filmmaking goals, and said, “Job well done. Each and every student listed in the credits gets an A!”

The Library wants to thank all the participants, those talented teens, and Wake Forest University for lending us their smiling, motivated grad students!

In the photos below, it's a group shot of future filmmakers, then Ariana Leon-Hicks and Anthony Joyce busy editing. 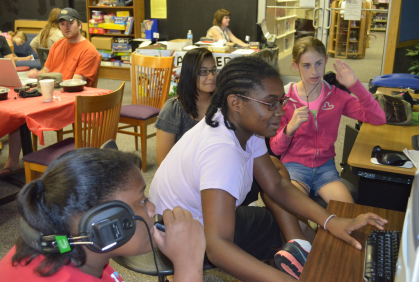 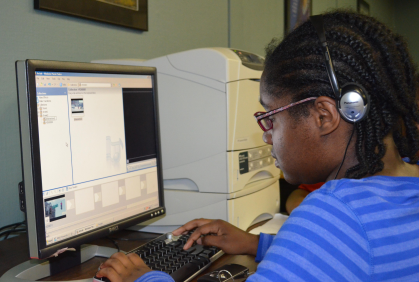 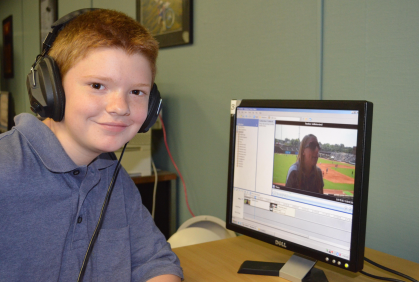