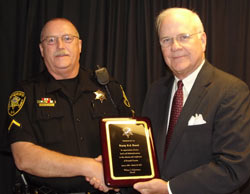 Deputy Dowell began his service in 1994 as a Patrol Deputy and served over 4 years in the Field Services Division. In 2003, Deputy Dowell was placed in the Courtroom Section of the FCSO until his promotion to the Civil Division in 2004. Deputy Dowell was promoted to Master Deputy status in May of 2011.

Deputy Dowell thoroughly enjoyed serving citizens of Forsyth County throughout his career. He plans to return to the FCSO on a part time basis. Congratulations Deputy Dowell!