On Thursday, January 12th, Sheriff Schatzman and the Forsyth County Sheriff’s Office were presented with a flag that was flown during an “Operation Enduring Freedom” combat mission in Afghanistan.

Detention Officer Jeffrey Cole requested the honor, and the flag was placed during the week of 9/11/11. He is a Petty Officer First Class in the Navy and has served with the Forsyth County Sheriff’s Office for three years. Detention Officer Cole has also been a member of the Honor Guard for two years.

The flag was placed in honor of the sheriff’s office and its employees for their unending service to the citizens of Forsyth County. The flag was also in memoriam and honor of the 10th anniversary of the 9/11/01 attacks.

The Forsyth County Sheriff’s Office is honored to have Detention Officer Cole as a staff member and is proud of his service to the United States of America. 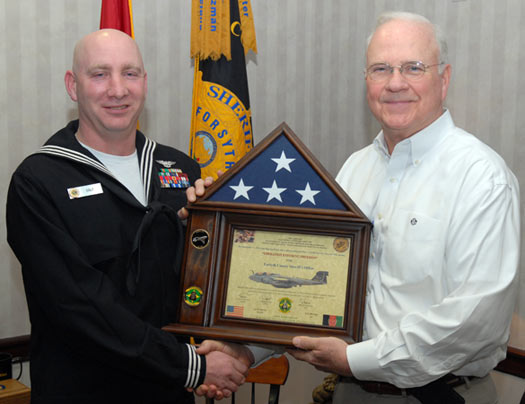