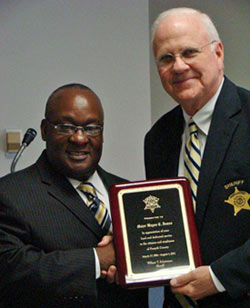 Major James began his career with the FCSO as a Detention Officer in the spring of 1986. Before his hire, Major James served 7 years in the U.S. Army. During the first years of his career, he quickly moved up in rank and was eventually promoted to Captain in 1996. In 1999, he was appointed Detention Center Administrator of the LEDC.

Major James has served on multiple community outreach boards and often volunteered his time in Prison Ministry programs. He served on the Transition team from 1993-1995 during the move from the previous detention facility to the current LEDC. In 1996, Major James received his Advance Law Enforcement Certificate.

His strong work ethic, leadership skills, community relations and genuine interest in helping inmates improve their lives have been major areas of interest throughout his career. Major James’ knowledge and guidance will be missed and we wish him the best in all future endeavors. Congratulations Major James!