Forsyth County Sheriff William T. Schatzman is pleased to announce the promotion of Major F. Brad Stanley to Chief Deputy Sheriff of the Forsyth County Sheriff’s Office. Chief Deputy Stanley was promoted effective April 30th, 2011 and he will oversee all aspects of the sheriff’s office to include the Enforcement Bureau, Detention Bureau and Administration Section. Chief Deputy Stanley is the second in command and will assist Sheriff Schatzman in planning, administering and coordinating the activities of the sheriff’s office. 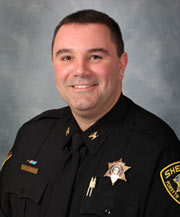 Chief Deputy Stanley, 43, is a lifelong resident of Forsyth County and has been employed with the Forsyth County Sheriff’s Office since 1993. He has served in all five enforcement divisions within the sheriff’s office during his career in various capacities. Prior to his promotion to Chief Deputy Sheriff, he served as Major of the Enforcement Bureau since 2007. Chief Deputy Stanley is a 2006 graduate of the 224th session of the Federal Bureau of Investigation’s National Academy, has an Associate of Applied Science Degree in Criminal Justice, has achieved his Advanced Law Enforcement Certificate from the North Carolina Sheriff’s Education and Training Standards Commission and holds a General Instructor certificate by the North Carolina Criminal Justice Education and Training Standards Commission.