On Friday, November 6, 2009, Sgt. Stan Barr was called to the 3rd floor hallway of Carver High School in reference to an unconscious female student. Sgt. Barr arrived, along with Dep. B. Henderson, to find a female student lying unresponsive with a large group of students and staff standing around her. Sgt. Barr, with the assistance of school staff, was able to clear the hallway of bystanders so Sgt. Barr could safely assess the condition of the unconscious student.

Upon checking the vital signs of the student, Sgt. Barr determined that she had a very faint pulse and was breathing. Sgt. Barr directed Dep. Henderson to summon EMS to respond due to poor radio and phone service inside the building where the student was located. While waiting for EMS to arrive, Sgt. Barr continued to monitor the vital signs of the student, whereby he discovered that she had stopped breathing and did not have a pulse. Sgt. Barr immediately began administering CPR to the student until she began breathing on her own again. EMS arrived on the scene and transported the student to N.C. Baptist Medical Center for further treatment.

Sgt. Stan Barr’s actions directly contributed to the student’s survival from this medical incident. As such, Sgt. Barr has been recognized by the Forsyth County Sheriff’s Office and the Winston-Salem/Forsyth County Board of Education with a Life Saving Award. 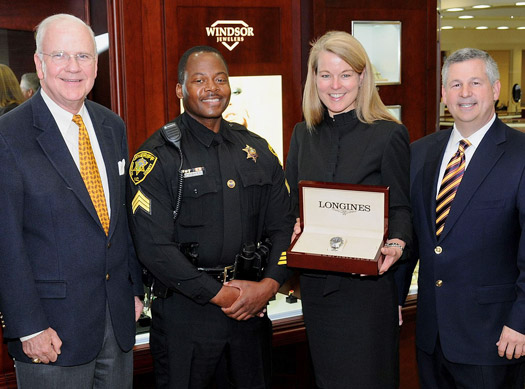