The award was presented by Communications Manager Neal Sizemore at the Annual Fall Conference held at the Sea Trails Resort in Sunset Beach NC. On hand to accept the award on behalf of the shift was 911 Telecommunicator Terry Caudle. The events leading to the submission and eventual winning of the award are as follows:

In the early morning hours of October 29, 2008 a female resident of Forsyth County was kidnapped from her home by two unknown assailants and locked in the trunk of her car. The suspects then stole the car with her locked inside.

Fortunately for the victim she had her cell phone with her and was able to make a call to 911 and her first point of contact was with Shift Supervisor Danny Collins. With today’s 911 and cell phone technology the communication center was able to track the location of the cell phone.

During the almost 30 minute ordeal with the victim locked inside the trunk, the call was disconnected several times. However she was able to dial 911 on several occasions and even though the calls were at times difficult to hear due to the fact the caller was locked inside and attempting to avoid rising suspicion by lowering her voice, the 911 Telecommunicatiors were able to track her location and gather additional information.

The entire shift, working closely with the Forsyth County Sheriff’s Office and the Kernersville Police Department Communications kept up with her location until the suspects wrecked the vehicle and fled the scene. The victim was found in the trunk unharmed.

Thanks to the dedication, training and collaboration with all agencies involved, B shift consisting of Shift Supervisor Danny Collins, Telecommunicatiors Terry Caudle, Shelly Simmons and Sarah Marshall helped avert what could have been a tragic ending. 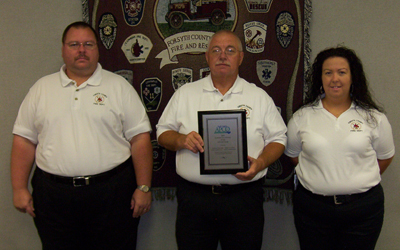