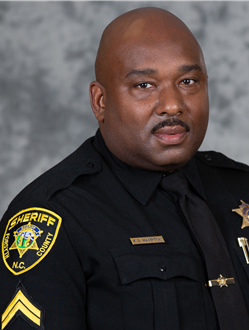 On the weekend of December 5, 2021, while at his residence and off duty, Corporal Hampton’s neighbor returned a wallet that had been found. Knowing that Corporal Hampton was employed with the Forsyth County Sheriff’s Office, they hoped he could assist in locating the owner. Corporal Hampton made several attempts to contact the owner using every method available while on and off duty. After making contact with the owner, they agreed to meet at a bank in Kernersville so the wallet could be returned. After meeting with the owner and making small talk, she expressed her appreciation that he had made so much effort to return the wallet and didn’t even care that some cash had been stolen out of it. After hearing this and unbeknownst to the owner, Corporal Hampton attempted to place $20.00 of his own money in the wallet. When she questioned his actions, he replied that he could not stand the thought of returning an empty wallet. His actions would have gone unnoticed had she not called the Sheriff’s Office to express her gratitude for such a selfless act. Corporal Hampton was not seeking accolades for his actions, he was only trying to do the “right thing when no one was looking.” This is the true embodiment of service and a testament to Corporal Hampton’s character and dedication to the public he serves in the community.