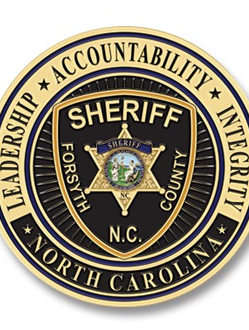 On February 24, 2021, an arson was reported in Clemmons, NC. Deputies going to the call were provided a description of the vehicle and perpetrator. They were advised that a white male wearing a black hat, red shirt, and jean shorts had busted the window open, poured a gas can inside the building, and then tossed an incendiary device inside. Upon patrol arriving in the area, they observed the Fire Department, who had already dispatched the fire and were working to control the area and ensure the embers did not re-ignite. The fire caused approximately $60,000 worth of damage. On February 25, 2021, this case was assigned to Investigative Services personnel. Investigator D. Ammons began working on this case immediately by coordinating with Investigator D. Faircloth and the Fire Marshal’s Office. Because of Investigator Ammons and Investigator Faircloth’s quick and diligent efforts, they were not only able to locate the suspect, vehicle, clothes, and receive a confession on the crime; but, they also went as far as obtaining a search warrant and locating other items related to the crime. It was also discovered the suspect was responsible for breaking approximately 20 car windows in the parking lot of a business in Winston-Salem. In addition, this subject was also responsible for throwing a Molotov cocktail-type incendiary device at a moving vehicle within the city limits of Winston-Salem. The suspect was identified and apprehended. Investigators are held to a higher standard and are expected to go above the expected call of duty. However, Investigator Ammons and Investigator Faircloth exceeded even that standard and it is because of these combined efforts the suspect was apprehended in such a timely manner. Both Investigators played an imperative part and are being recognized as Enforcement Staff Members for February.