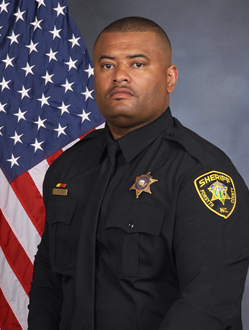 Corporal B.R. Richardson has been employed with the Forsyth County Detention Center since December 2003. He has shown his dedication to the agency on several occasions as well as his due diligence to perform his duties to the best of his abilities, most recently on September 5, 2020. Corporal Richardson responded to a call regarding an inmate who was unresponsive in a housing unit. Once on the scene, Corporal Richardson found there was no pulse and took over chest compressions from another staff member. Three doses of Naloxone were administered via the nasal cavity to the unresponsive inmate. After approximately 100 chest compressions, Corporal Richardson discovered a strong pulse in the carotid artery. Other medical staff reported that they found a pulse in the distal arteries. Corporal Richardson ceased compressions and performed a head chin tilt and discovered that the inmates tongue had obstructed his airway. Corporal Richardson obtained an Oropharyngeal Airway Kit to insert into the inmates airway. Another officer was assisting with forcing ventilation into the inmates bag-valve mask supplemented with 15 mL /minute oxygen. A second set of vitals were taken and found that the inmate’s oxygen saturation had increased from 77% to 99%. Minutes later, the inmate gained partial to full consciousness and was able to answer medical history questions. Forsyth County Emergency Medical Services arrived on scene and the inmate was transported to Wake Forest Baptist Medical Center. The inmate returned to the detention center later the same day. Medical staff checked the inmate once he returned and gave the approval to place him back in a regular housing unit. Corporal Richardson is being commended for the job he did and his determination to keep this inmate alive.