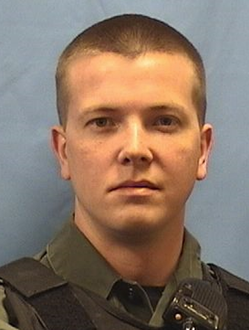 On August 23, 2020, Deputy Mitchell responded to an Emergency Priority response call for a stabbing. Upon arrival, Deputy Mitchell’s attention was drawn to the suspect who immediately began to flee. Deputy Mitchell and his K-9 partner Bruno gave chase. When the suspect saw that his escape route had been compromised by K-9 Bruno, he suddenly turned around and attacked Deputy Mitchell. According to witness statements and available evidence uncovered by other responding units, the suspect assaulted Deputy Mitchell and then proceeded to apply a choke hold on him. Deputy Mitchell was eventually able to fight his way out of this very precarious situation and subdue the suspect while at the same time maintaining control of his K-9 partner so Bruno would not injure any bystanders. Shortly after, additional units arrived and were able to secure the still aggressive and resistant suspect. The suspect was found to still be in possession of a knife which he was unable to deploy against Deputy Mitchell. Deputy Mitchell suffered injury to his hand, face, and neck during the altercation. Additionally, he continued to suffer the effects of being choked to the extent that he was transported to Baptist Hospital for treatment. He was released from the hospital after several hours and was allowed to return to duty a few days later. Deputy Mitchell’s actions in pursuing and subsequently defending himself and bystanders from the aggressive response of the suspect highlight the determination, dedication, and tenacity of Deputy Mitchell to protect the public. His actions serve as an example for all deputies of the agency to strive to achieve.