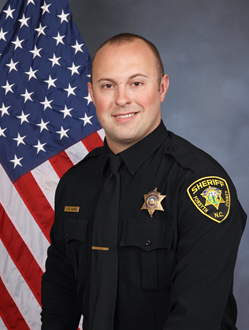 On 7-12-2020, Deputy C. Owen responded to reports of a subject stepping in front of moving vehicles while walking along the road. The subject was suicidal and encouraged Deputy Owen to end his life. Deputy Owen positioned himself between the subject and the roadway to maximize the subject’s safety and allow time to gain the subject’s confidence. The subject failed to cooperate as he tried to grab Deputy Owen’s gun and then shed clothing in an effort to fight or flee. Deputy Owen recognized these signs and continued to build rapport and deescalate the situation while maintaining a position between the subject and the roadway. Abruptly, the subject leaped toward oncoming traffic and Deputy Owen was able to restrain him. Deputy Owen continued to talk to the subject throughout the encounter. Eventually, the subject opened up to Deputy Owen and he was able to receive appropriate care. Deputy Owen’s actions demonstrate his commitment to this profession and the community he serves. His ability to identify that this subject was in distress and tirelessly working to learn the root cause of the issue while protecting him is worthy of the highest accommodation.