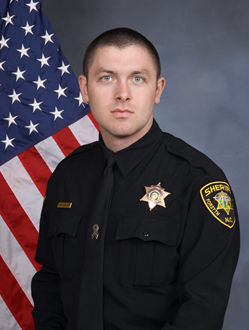 On June 18, 2020, Deputy Eason responded to an address to check the welfare of the resident. Deputy Eason ultimately had to force entry into the residence where he located the resident deceased. Deputy Eason assisted a family member with securing the residence as a result of the forced entry and the family member later expressed his appreciation that Deputy Eason “went above and beyond what is typically expected of a Deputy Sheriff.” Deputy Eason was aware that the decedent’s daughter would be arriving at the residence to collect her father’s belongings and make plans. With this thought in mind, Deputy Eason recommended removing the carpet that was soiled as a result of the death. The family member advised this task would be too difficult for him to do so Deputy Eason completed the task of removing the soiled carpet himself. The daughter of the decedent contacted this agency and expressed how empathetic Deputy Eason was to her. She was overwhelmed that a Deputy Sheriff would take it upon himself to ensure measures were in place to prevent additional emotional distress after the family had already suffered a tragic loss. The two family members were extremely grateful for the respect and assistance provided to them by Deputy Eason. The Forsyth County Sheriff’s Office strives to ensure our deputies offer the highest level of service possible, and on this occasion, we are proud of the way Deputy Eason did all he could during such an emotional time for the family.