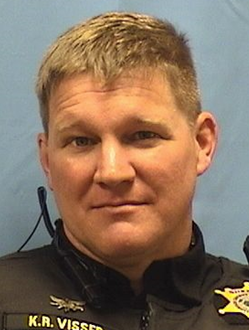 On April 4, 2020, Corporal K. Visser was on patrol when he came upon an apparently stranded motorist on US 52 North near Waughtown Street. Corporal Visser located a female inside the vehicle who was unresponsive. The vehicle was locked so Corporal Visser made multiple attempts to rouse the female so he could check on her welfare but she did not respond to his efforts. Corporal Visser noticed she was experiencing shallow breathing as well. Due to the likelihood that the female was suffering from either an overdose or another medical emergency, he utilized a tool to break the passenger side window to gain access to her. However, she still did not respond to Corporal Visser’s attempts to wake her. Corporal Visser administered a dose of NARCAN and Emergency Medical Services arrived shortly thereafter. The female regained consciousness and confirmed she had overdosed. The female may have succumbed to the effects of the overdose had it not been for the persistence of Corporal Visser to render aid.