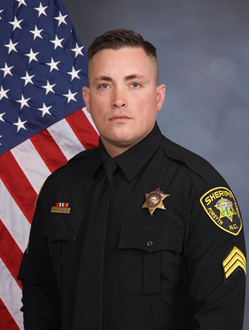 On February 17, 2020, Lt. Weiderman was overseeing the security of a double homicide plea agreement at the Forsyth County Hall of Justice. Lt. Weiderman prepared his staff for possible tension from friends and family for both the Defendant as well as the victims inside the courtroom. As the prosecutor explained the manner in which one of the victims was murdered, a disruption occurred in the courtroom and a male subject charged down the aisle towards the Defendant. This action resulted in others in the courtroom to become vocal and irate as well. The subject broke from the grasp of deputies who were trying to control and restrain him. Lt. Weiderman was the last defense before the subject could reach the Defendant. Lt. Weiderman deployed is Axon Taser-7 to stop the subject, which allowed deputies to place restraints on him so he could be removed from the courtroom. During this ordeal, Lt. Weiderman remained calm and in control while giving directives to his staff. Lt. Weiderman displayed what it means to be a leader during the midst of chaos and confusion.