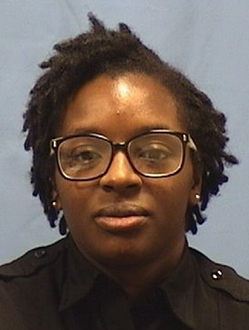 Officer J. Smith has been employed at the Forsyth County Law Enforcement Detention Center for less than a year. On March 12, 2019, Officer Smith was performing her assigned duties in a dormitory when she noticed that an emergency call button had been activated in one of the cells. Officer Smith quickly responded to that location and discovered an inmate had torn a bed sheet to make a noose and tightened it to the point of losing consciousness. Officer Smith called for emergency assistance and continued to render aid to the inmate until other staff arrived. Officer Smith’s immediate response is a direct reflection of the pride she takes as a Detention Officer and her swift reaction played an intricate role in preventing the inmate from taking their own life.