May Sworn Staff Member of the Month 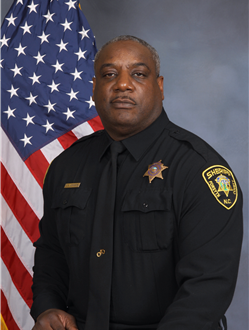 On May 16, 2018, Deputy Johnson was sitting in his car in the parking lot of a local church working on paperwork, when another car pulled in beside him. A female exited the vehicle and ran over to his patrol car; a male then exited the vehicle with a large knife in his hand and began chasing the female around the patrol car. As Deputy Johnson exited his patrol car, the couple went to the ground and Deputy Johnson observed the male trying to stab the female. Due to the close proximity of the female, Deputy Johnson used hard hand techniques to subdue the male subject. After restraining the male, he observed several deep lacerations on the female’s arms. Deputy Johnson then rendered medical attention to the victim. As a result of the investigation, it was determined that the suspect was attempting to inflict serious bodily harm to the victim. It was also determined that the suspect had kidnapped the victim at knife point.

Deputy Johnson’s quick actions and great judgement resulted in a lifesaving circumstance for those involved. His actions are at the heart of Law Enforcement operations everywhere honoring the motto "To Serve and Protect".