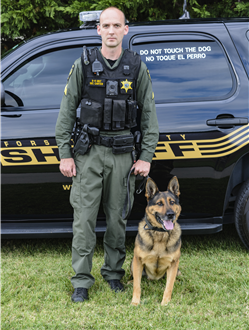 On December 19th, Sergeant Carter, with his K9 Kimbo, were requested to assist with a multi-agency operation. A vehicle was stopped and three subjects ran from the traffic stop. One subject was arrested while Sergeant Carter and Kimbo were in route to the location. At least one of the subjects was reported to be armed with a handgun. Sergeant Carter arrived and began casting Kimbo in the wooded area where the first subject was apprehended. An article search of that area located items dropped by the suspects. Sergeant Carter then began his track at the suspect vehicle. Kimbo tracked to an underground culvert and then tracked back into the woods through thick underbrush and briars until he suddenly stopped. It was then that Sergeant Carter noticed the suspect lying on his stomach on the ground with his hands under him. This subject, who matched the description of one who ran from the vehicle, was then taken into custody by other units.

On the same night, Sergeant Carter was again called to assist with an unrelated traffic stop. He was asked to perform a free air sniff of a vehicle and in doing so received a positive indication from Kimbo. Search of the vehicle produced narcotics paraphernalia and a stolen television.

Sergeant Carter is the FCSO K9 Coordinator. He and Kimbo are an effective K9 team and certainly a benefit to the Forsyth County Sheriff’s Office.