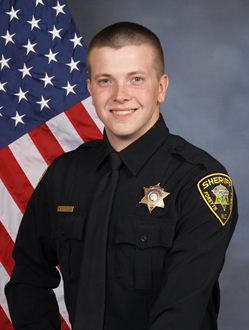 On March 4th, Deputy Mitchell took it upon himself to proactively seek out enforcement and initiated a traffic stop for a speed limit violation. During the course of his investigation, Deputy Mitchell developed probable cause for a vehicle search and performed an on-view arrest after locating nearly 6 pounds of marijuana valued at approximately $20,000. Also seized was nearly $1,000 in cash and digital scales. The offender was charged with multiple felonies and misdemeanors.

On March 22nd, Deputy Mitchell responded to a welfare check call for service. While on-scene, a family member arrived and provided us with access to the residence. A female was located inside the residence that was unresponsive and a suicide note was found. The female was not breathing and a pulse could not be detected. Deputy Mitchell promptly requested EMS and issued Narcan in an attempt to revive her. Deputy Mitchell administered two doses of Narcan, which resulted in the female regaining consciousness and she was transported to the hospital by EMS. The following day, the daughter of the revived female made contact to express her gratitude. She was beyond appreciative of Deputy Mitchell's quick response in saving her mother's life.